The new corporate owner of the Echo Valley Apartments could have decided to invest in solar power at the affordable-housing complex in West Warwick by limiting the output to only what the tenants would use. This would have most likely resulted in a simpler regulatory process before local authorities and a shorter project timeline. In order to maximize rooftop space and generate more renewable energy, Fairstead designed a 497-kilowatt system that could supply power to any of the approximately 100 families at Echo Valley and send out any remaining power to residents of the surrounding community who subscribed.

In doing so, Fairstead says, the array at Echo Valley, which was completed earlier this fall, became the first community solar project located at an affordable housing complex in Rhode Island. It would be a notable achievement in several respects. For one, there are only a handful of solar projects that serve low- and mixed-income housing developments in the state. Despite changes in state law in recent years to encourage more of the projects, there are still impediments, including an older statute that restricts how electricity is metered.

Community solar is also a relatively new thing in Rhode Island. The first such project went into operation last year, and fifteen more have either been built or are in development. Community projects fall into a specific class of solar in which power is shared by many smaller users, usually individual homes, rather than being utilized by one large user, like a hospital, university or municipality.

The Echo Valley solar array also stands out because of its location in a densely developed town with a large share of low- and moderate-income households. Environmental-justice advocates have long complained that urban and minority communities are underserved by renewable energy. It’s a national problem that’s also true in Rhode Island, where the bulk of solar and wind projects are located in rural areas, where development costs are lower. The company has reduced the carbon footprint of each of its newly acquired apartments by 30% on average, Fairstead states. Over the last six years, the company has rehabbed some 16,000 apartments in 14 states, but the Echo Valley project is its first foray into community solar. 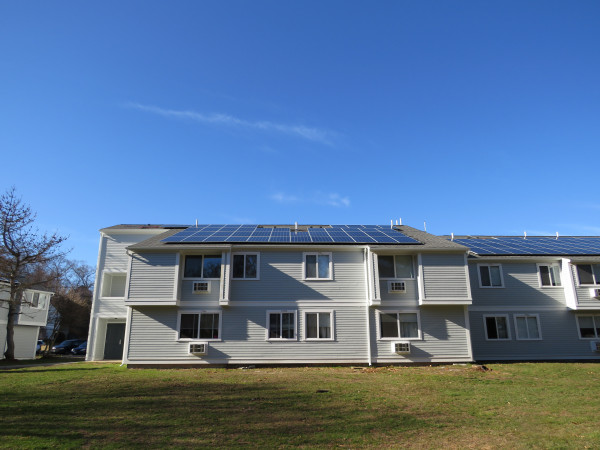